The following exemplars illustrate how these formats have been used to add narrative and emotion to fund-raising discourse. They show how some leaders in the nonprofit sector are becoming the voice of philanthropy (the voice of the friend of man) by writing connecting narrative moments that focus on people. 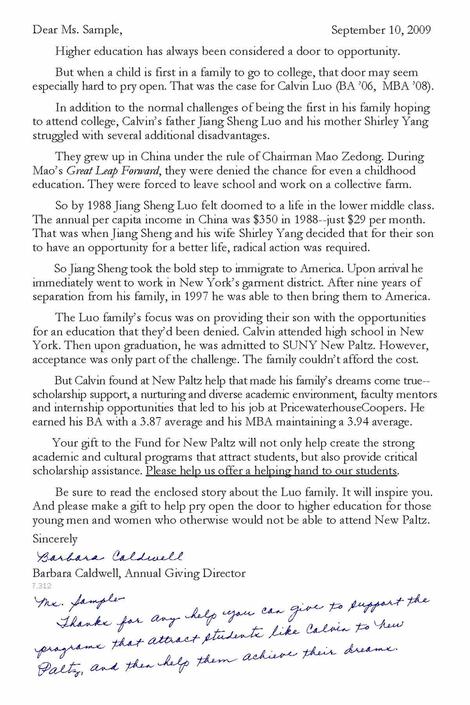 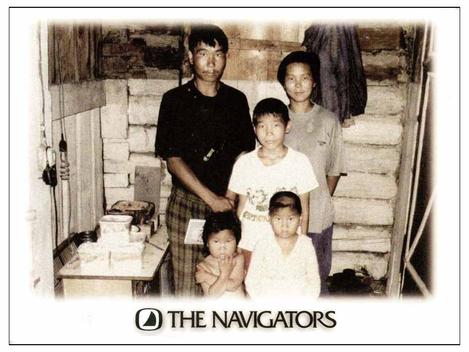 Back Page of a One Minute Digest for AACF 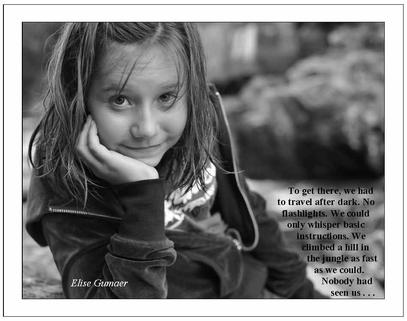 Daughter Elise had accompanied her parents--Oddny and Steve Gumaer, founders of Partners Relief and development--on a visit to a secret refugee camp inside Burma, where terrified nationals had sought protection. The suffering Elise witnessed moved her to make a sacrificial gift from the little she had been saving to buy a cell phone. Her action was reminiscent of the biblical parable of the widow who, out of her poverty, gave to God all that she had to live on. Elise's selfless act was the connecting narrative moment on which this fund appeal was built. It was presented in an A-6 size story card (slightly enlarged here to enhance readability): 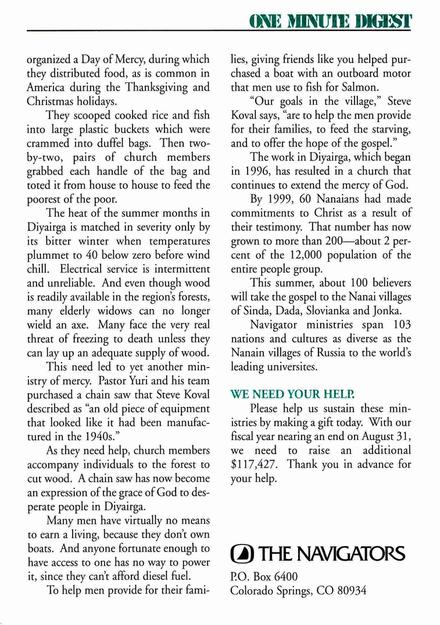 Back Cover of Story Card for SUNY New Paltz 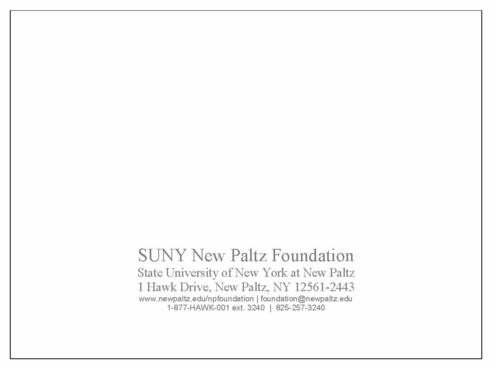 Back of a reply device One Minute Digest for Teen Challenge

(fold-over note card, on 4-1/2" x 6" cover stock)
(The following note card for The Navigators reinforced and complimented the One Minute Digest above)

Research Begs the Question--Where are the People?

While leaders in philanthropy recognize good stories when they see them, and fully believe in the superiority of narrative and emotion over a focus on stiff analysis and exposition . . . their writing contains neither. No stories. No emotion. Their writing resembles academic prose. Yes, there are a few examples of really good writing out there. But most fund-raising discourse is ill-matched to its target reader and ill-formed given its rhetorical aims.          Language research confirms that the ability to marshal linguistic and paralinguistic resources to produce effective fund-raising discourse is difficult. Though the data confirm that few write well, it is a skill that can be learned. And if you need help right now, we can interview your staff, gather the raw materials needed, and write a fund appeal for you. While there are many ways to frame written fund-raising discourse, given the fact that space and reader attention is limited, we've developed four standard formats for presenting connecting narrative moments . .

Front Page of a One Minute Digest for The Navigators

The message of this fold-over note note card parallels the the longer narrative printed on the two-panel story about outreach to the Nanian people who live on the brink of starvation in one of the harshest environments on the planet. The family is pictured in their home with their young daughter who died shortly after the family's picture was taken. This note card was further personalized by crossing out the "Dear Friend" salutation with which it had been preprinted, then adding the salutation in blue Computer HandScript.​

The key to the Partners Relief & Development campaign was the powerful connecting narrative moment presented in text recounting the conversation between mother and daughter. Elise had been exposed to the tragedies of desperate families. Escaping persecution, they had lost everything of worldly value they owned, then they lost what really mattered--their loved ones. Their desperation moved a thirteen-year-old to give all the money she had saved for a cell phone, believing the needs of those she had met were far greater.

frames a compelling story and destroys our defenses in the the selfless example of little girl. This piece was not long. The heat of the discourse is in the very short dialogue between mother and daughter. Though brief, it created a strong emotional connection through the scenes painted.

Of course, to get to the reader to the touching conversation between Elise and her mother, the first task was to grab attention. This was accomplished with a stunning visual on the cover and the beginning of a story that reads like the real-life drama it was. Most letters take paragraphs to warm up, by which time the reader has become bored and has abandoned the text. But this story card starts with action and makes you want to turn the page. Then once inside, the letter is personalized and the drama continues.

Finally, our Computer HandScript note at the end adds an additional human touch to the appeal. Plus, it provokes curiosity by making the reader ask: "What do you mean, 'Sometimes our children teach us rather than the other way round'?" Since most letters are skimmed if read at all, the P.S. is a critical piece of textual real estate. Like a store-front sign advertising a special offer, a P.S. can make a reader want to back track for more information in the body of the letter.

The other six exemplars that follow frame similar moments with characters that find themselves in challenging situations. The connecting narrative moments depicted provoke empathy, discontent, and outrage. These moments in turn provoke readers to act . . . to become the heroine or hero who resolves a conflict by making a gift.

The Human Brain is Hard-wired to Respond to Narrative

Neuro-biologists have traced the empathy such narratives prompt as a set of neurological responses produced in the human brain by a network of synaptic connections called mirror neurons. When activated, this neural substrate generates a range of emotional responses to narrative that is not present when one reads expository discourse. The human brain responds differently to fiction, drama, or comedy than to more abstract genres like statements or foundation proposals.

These patterns of response have been confirmed by fMRI (functional Magnetic Resonance Imaging) data in the form of brain-wave tests at two leading Southern California universities--UCLA and USC. Subjects' neural responses were recorded as they viewed video and written narratives that presented the same scenarios. Particularly germane to the task of writing fund-raising discourse was the fact that these experiments found written narrative writing to be as powerful in producing heightened neural responses in subjects as the same scenes depicted on video. Good writing was found to be as strong a stimulus as video. This is consistent with the notion that a good book is hard to put down because it involves us on so many levels and is almost like being there in person.

With spoken discourse, you know a connecting narrative moment has been created when the audience, as if it were a single being, utters a collective "ahhhhhhh." Such moments of empathy are the product of an ensemble of well-chosen linguistic and paralinguistic features, leveraged to achieve the rhetorical aim of telling a story. You know the story is good when it makes its intended reader or hearer cry, sigh, laugh, smile, scowl, or frown. The goal of good writing is to create a parallel response among readers.

Why Narrative is Critical to Fund Raising

People give to people, for people. Most donors don't give because they're impressed with a well-worded mission statement, comprehensive strategic plan, or the detailed metrics specified to ensure accountability. These things are important, but the real reason people give is that they SEE and FEEL how their giving changes someone’s life. The best way to put a human face on the work of a nonprofit organization is to tell a story that creates a connecting narrative moment that . . .

The next exemplar was designed for the back of a receipt. It tells the story of a young man, Alvin, dealing with the decision of what to do when he found money that someone else may have lost. As a recovering drug addict, Al was learning how to be honest, after a lifetime of stealing to support his drug habit. 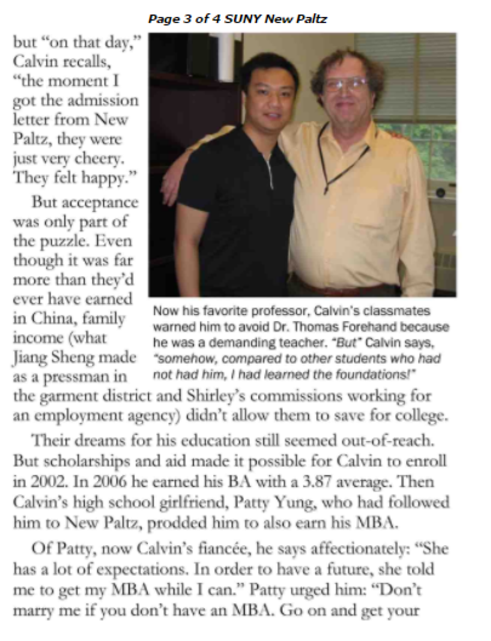 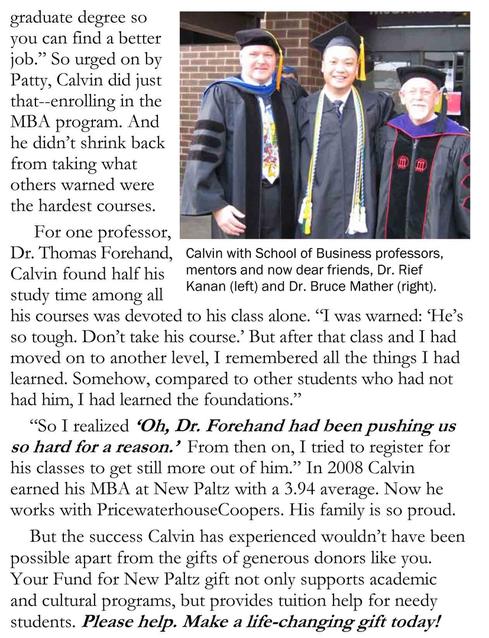 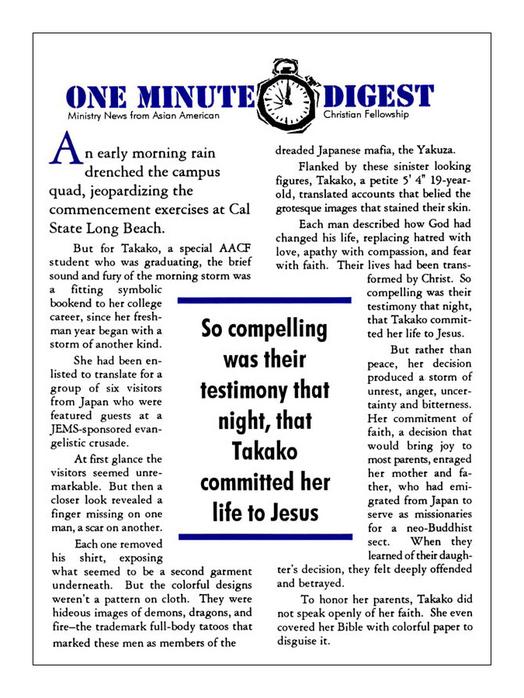 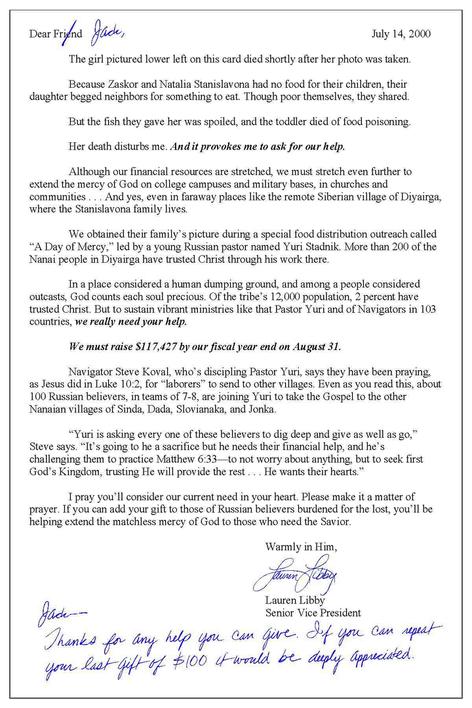 Back Cover of Story Card for Partners Relief & Development​

​Read More About It 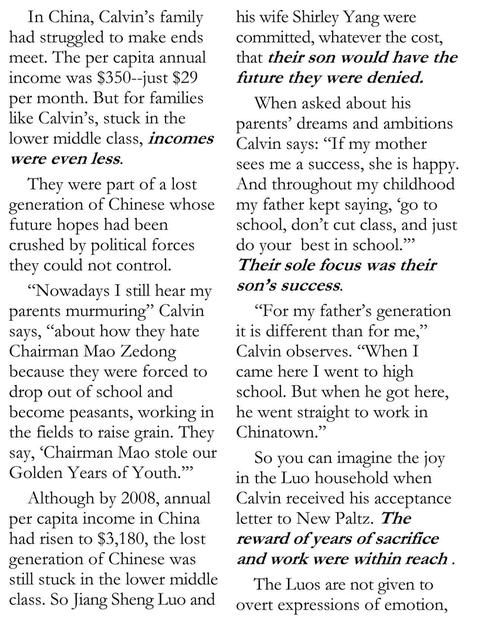 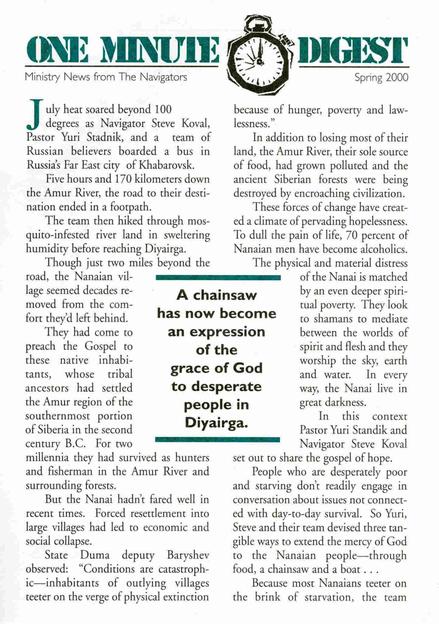 Inside Copy of Story Card for Partners Relief & Development

Front Cover of Story Card for The Navigators

Back Page of a One Minute Digest for The Navigators

Front Page of a One Minute Digest for AACF 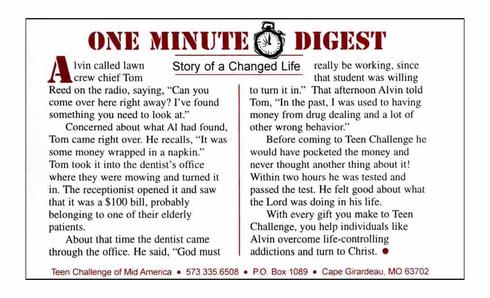 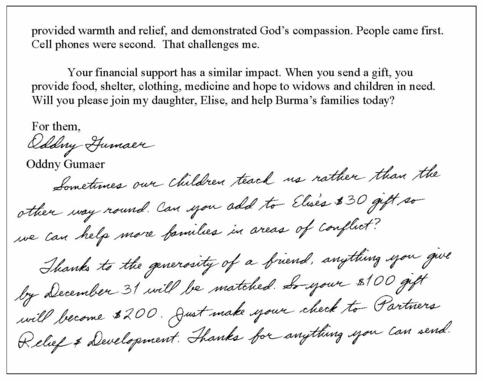 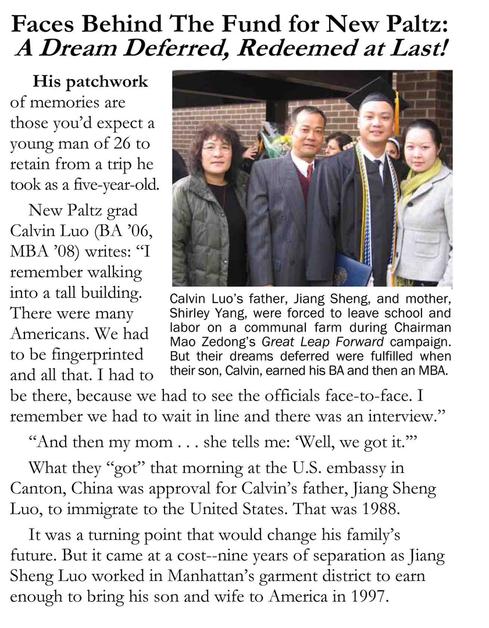 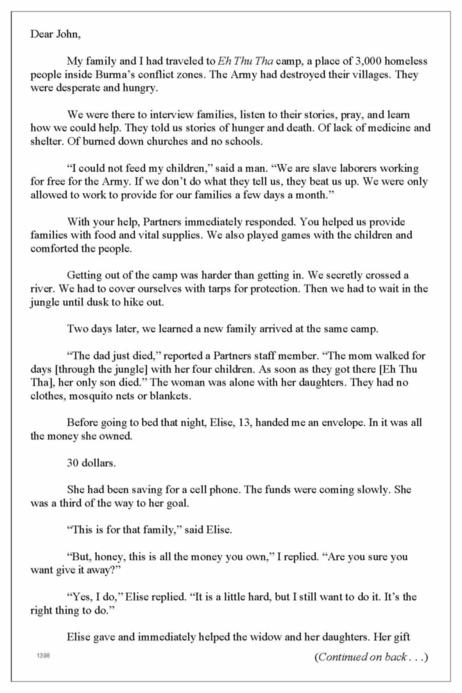 ​The Sad Truth About Fund-Raising Discourse

As noted above, most nonprofit fund-raising discourse (both direct mail and online) contains very few connecting narrative moments like the Partners Relief & Development and Teen Challenge pieces above.

That's the sad conclusion I present in my Ph.D. dissertation in the field of linguistics. I examined more than 1.5 million words of text in 2,412 fund-raising documents from all 735 U.S. organizations that raise at least $20 million or more in direct public support. I also examined texts from 145 smaller nonprofits--880 organizations in total. Using factor analysis and analysis of variance (ANOVA) to quantify the standardized frequencies of 67 key linguistic features in direct mail and web-based content, I compared the linguistic profiles of the fund-raising discourse with 23 common genres of texts.

Extensive research has profiled how executives at America's top nonprofits believe they should write and how they actually do write. The study examined the fund-raising discourse of all 735 nonprofits that the IRS reports raise at least $20 million annually in direct public support (from IRS form 990, line  1a/1b). Among the organizations studied were a number of international nonprofits that raise at least $20 million in the U.S. In addition, 145 nonprofits that raise less than $20 million annually were included, bringing the study's total population to 880. In answering a survey question about preferred writing style when drafting online or printed fund-raising texts, by a ratio of nine to one the leaders of these elite nonprofits said that they believe. . .

Inside Copy of Story Card for SUNY New Paltz

Seven examples are presented below in which connecting narrative moments form the core of fund appeals. The first tells the story of a sacrificial gift given by the daughter of Partners Relief & Development's president, Oddny Gumaer. The Gumaers work in areas of conflict like Burma where people suffer horrific abuse at the hands of a dictatorial military regime that conscripts civilians, brutalizes them as they work in slave laborer camps, and has been accused of genocide, massacring entire villages. 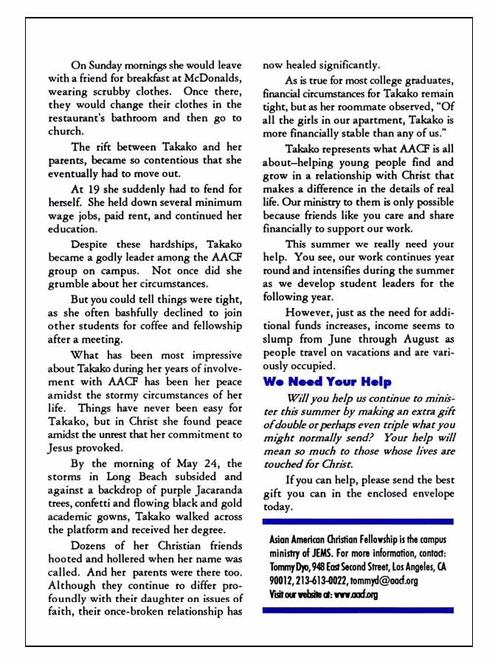 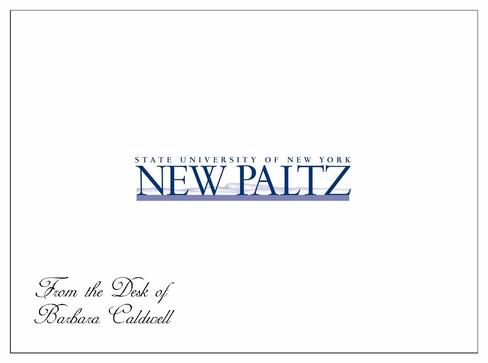 Inside Copy of Story Card for The Navigators​

The message of this fold-over note note card parallels the the longer narrative printed on the four-panel story, telling the journey of the Luo family to America and Calvin's eventual graduation from SUNY New Paltz. This repetition was intentional, based on the premise that few individuals read every piece in a fund appeal package. Enough information was presented in each piece so that independent of the other elements in the mailing, a reader would be motivated to respond to the appeal by reading any one piece of the package.